You’ve been waiting and wondering when this would happen— that first sign that maybe, just maybe, your baby is ready to come out into the world. And then, one day, you get a sign. Or is it a sign?  Is that my mucus plug? Is that what it is supposed to look like? Should I tell someone? Is labor coming?

If any of these questions sound familiar, you’re in good company. As far as signs of labor go, the loss of the mucus plug is well known but also a famously gray area. So let’s dive right into this big, little part of pregnancy and labor.

What is a mucus plug?

Technically speaking, the mucus plug is a thick collection of mucus that accumulates in the cervix during your pregnancy. Physically, it blocks the opening of the cervix. It also contains natural, antibacterial properties that help prevent infection from reaching your baby in the uterus and preterm labor. The mucus plug provides a critical added barrier of protection for your baby during pregnancy.

What happens when you lose the mucus plug?

As the cervix starts to open (dilate) later in pregnancy, the mucus is released into the vagina.  You might notice an increase in vaginal discharge when this happens. This discharge can be clear, pink, or even blood tinged. Sometimes it appears as small amounts of brownish mucus when you wipe or in underwear. Sometimes it appears as bigger, thicker jelly-like globs (yes, you read that right).

All this is normal, so no need to call your OB or midwife. But if you’re a little unsure, definitely check in your care team or call or text your doula. Especially now that you’re probably ripe with anticipation over whether this means labor is near (pun totally intended).

Labor?! Don’t get too ahead of yourself…

Here’s where we enter the gray area— losing your mucus plug is a good sign that your body is on the way to preparing for labor. Generally, it can mean that your cervix is beginning to dilate, causing the mucus plug to dislodge. But, this doesn’t necessarily mean you are actually in labor.

Once you begin to see signs that you are losing your mucus plug, it can be anywhere between a few hours to a few weeks before labor starts.

The mucus plug has the incredible ability to regenerate if lost too soon and once you begin to see signs that you are losing your mucus plug, it can be anywhere between a few hours to a few weeks before labor starts. The process of losing the mucus plug can occur all at once or be long and slow (as with other signs of progress and prep work for labor!)

So how much attention should you give this little event? Well, not too much, unfortunately.

What is Bloody Show ?

Along with the mucus plug, many will also notice the presence of blood- or what is commonly referred to as Bloody Show. Often we think of blood during pregnancy as a cause for concern, but not in this case—this type of blood is normal.

The cervix is highly vascular, so it has a tendency to bleed when change occurs (like dilation) or anytime it’s manipulated (think cervical check). Some women will have a good amount of noticeable blood mixed with mucus while others may not see much.

When to check in…

Like with a lot of things during pregnancy and labor, there are many variations of normal. Of course don’t hesitate to keep your midwife or OB in the loop. While these changes are common during the last weeks of pregnancy, if you experience spotting or bleeding in the first or second trimester, it could be valuable to check in with your care team for guidance. 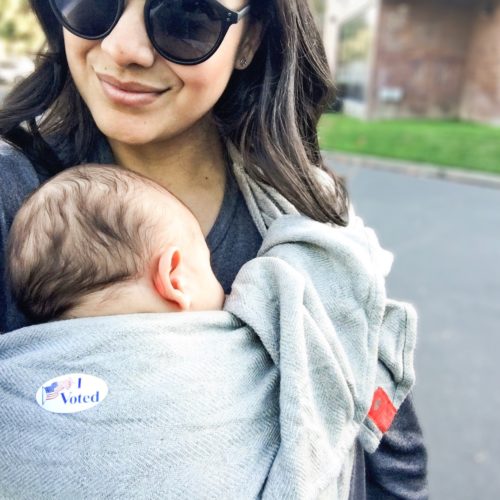 Amber Navarro is a birth doula and certified lactation educator & counselor. She graduated from the University of California, Irvine with a degree in Psychology. She currently lives in Orange County, Ca with her husband and three boys where she's found a home within the birth community. Her work as a doula allows her to utilize her passion for pregnancy, birth, babywearing, and breastfeeding to support new parents.